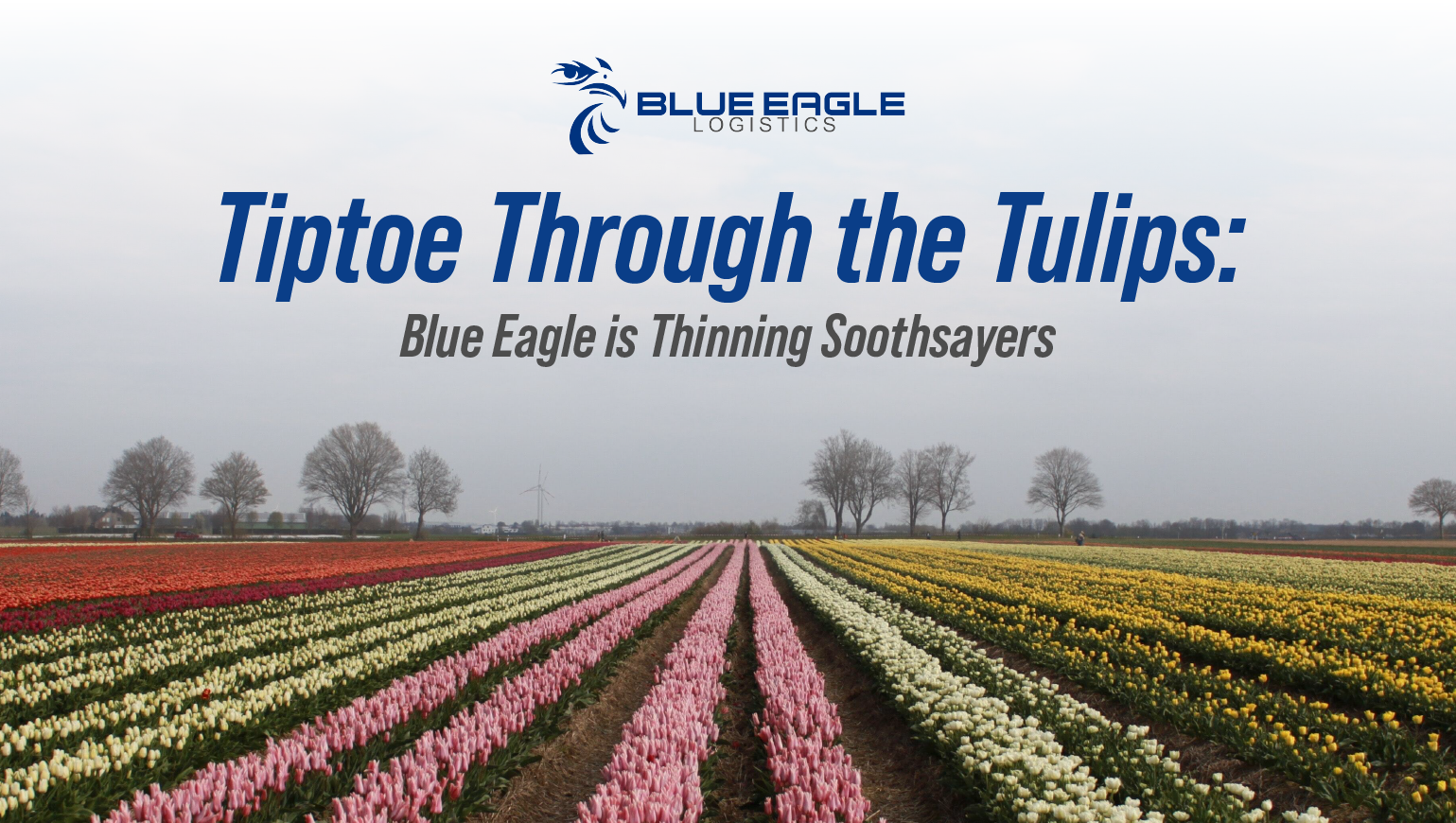 07 Apr Tiptoe Through the Tulips: Blue Eagle is Thinning Soothsayers

As tulips emerge, the adage of “As new and as ancient as Spring,” comes to mind. But Spring-time images silversmithed by author CS Lewis could hardly be more at odds with the predictions of a coming bloodbath by popular shipping logistics oracle, Freightwaves.

Freightwaves’ analysts forecast the impending collapse of many freight and trucking companies:

A rash of trucking bankruptcies are on the way and it will be Bloodbath 2.0. Trucking has enjoyed the largest number of new entrants in its history over the past two years. New fleet registrations were up to 20,166 last month alone.

This is unprecedented. The last peak was in August 2019; there were 9,511 new trucking fleets and that was in the middle of one of the weakest freight markets in history. New trucking registrations tend to lag market conditions, so we can expect new fleets to continue to enter the market, even after things soften. This will make the downturn that much worse.

Keeping tulips as the analogy, we remember the famed fall of the Tulip Bulb Market of Holland. It’s remembered as the world’s first Stock Market bubble burst. At its height, frenzied Tulip Traders were exchanging so aggressively that they trespassed into ghost flowers– tulips that didn’t even exist, using equity like Dutch mansions.

Inflated prices and a flood of flowers caused the market to fall, and the Dutch economy appeared to be devastated. Investors were so indebted that it’s rumored that noblemen drowned themselves in canals after losing their family fortunes.

However, the Dutch East India Company was in its early infancy, trafficking in tea leaves. With the ashes of the Tulip Market as ground cover, it became the wealthiest, most powerful company the earth has ever known… present global market included.

Similarly, we recognize that the transportation and specifically the trucking industry are both due for a correction. But Doomsayers’ third eye is clouded, if they neglect that the 2019 collapse cleared the field for the healthiest, most established logistics companies to capture market share.

The collapse allowed the industry’s bulbs to be thinned if you will. It is historically, mathematically clear that whatever the fate of the new spring of trucking companies, “hope springs eternal” is an ancient sort of wisdom. And using the comparative Commercial Carrier Journal graph of new for-hire trucking companies featured below, Freightwaves’ projections appear to be a zoom in on a market correction before another spike.

Buffet’s not wrong: The mathematical theory of Fractals is that a fraction resembles the whole: Just like a chunk of granite resembles the mountain it broke off of, the stock market can be reliably counted on to follow larger patterns of steady growth.

Blue Eagle likes the Applachian mountain chain that we’re carved from: Pennsylvania boasts the third largest density of truckers of any state in the Union. As a company, we are supremely confident in our ability to adapt and to lean on our experience to ride out the rises and falls of the market.

And even as the tulip bulbs burst this Spring, we are reading the tea leaves and watching the economy spring forward like the greatest shipping logistics company of all time: The Dutch East India Company.