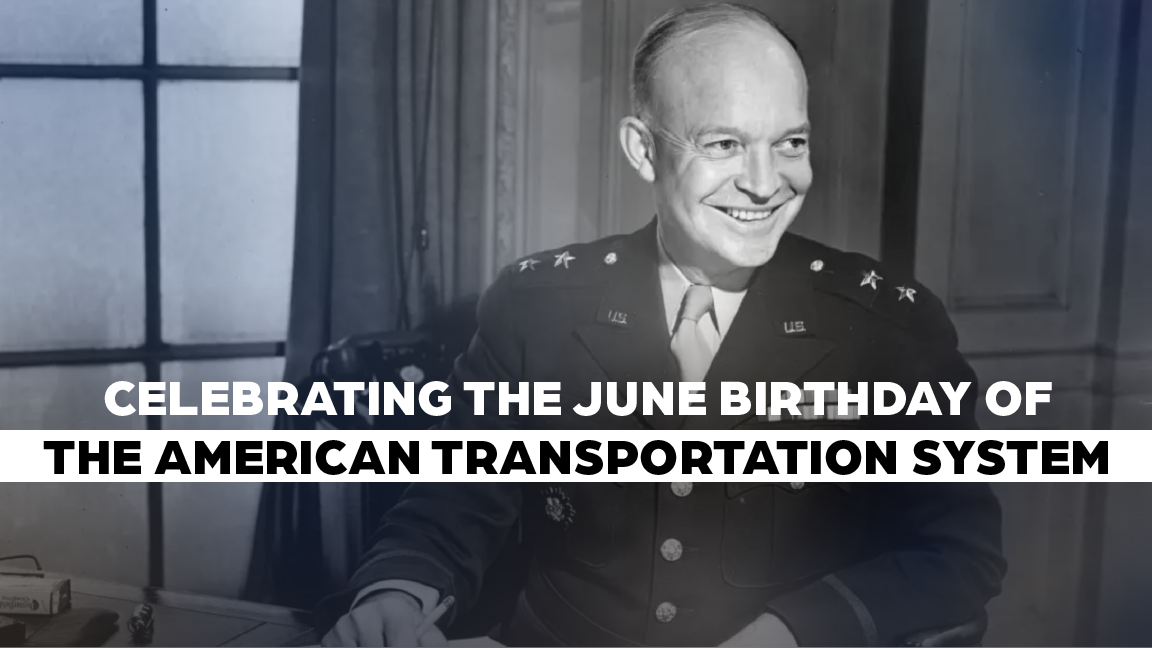 03 Jun Celebrating the June Birthday of The American Transportation System

“Together, the united forces of our communication and transportation systems are dynamic elements in the very name we bear—United States. Without them, we would be a mere alliance of many separate parts.” — President Dwight D. Eisenhower

As Blue Eagle anticipates the future of the transportation industry, we want to take a moment to look back at the June birthday of the American Highway System.

The man that most championed the American Highway System is President Dwight D. Eisenhower. Second only to leading the Allies to victory in World War II, President Eisenhower considered his establishment of the American Transportation System to be his most important, most transformative act as a leader.

President Eisenhower understood that after subduing the global crises abroad, his next most important task was to look inward to American unity: Eisenhower’s answer to that need for unity was the very tangible beginning of one of the greatest investments in infrastructure ever ventured upon:

It was a work unparalleled since the country put its backing behind dynamiting its way through the Rocky Mountains to build the transcontinental railroad. At a staggering 46,876 miles of Interstate Highway, the 1956 construction project has enough highway miles to drive around the world. Twice.

“The bridges on the Interstate System, in aggregate, will be long enough to span the Rio Grande River, lengthwise…Total excavation for the Interstate System calls for moving enough material to bury the whole State of Connecticut knee-deep in dirt,” according to the Federal Highway System Administration.

Interestingly, President Eisenhower cut his teeth as a leader as a wartime President, and as part of that background he intended that the American Highway System would double as a utility of war: Eisenhower believed that in the event of a domestic attack, roads needed to be built to accommodate a plane taking off or landing.

Today, it’s difficult to imagine thoroughfares like the I-78 corridor serving the needs of war planes, and whatever Eisenhower’s ambitions for the war-ready-nature of American roads, his true aim: creating national unity has been one of his most lasting successes as a leader.

President Eisenhower’s vision for the American people– a citizenry united with tributary-like roads that flowed into one river-road of culture enjoys an unparalleled symbiosis.

Ironically, as our transportation system has grown beyond what President Eisenhower could ever have imagined, it has allowed the American people to look outward to the global economy:

As a country our transportation industry helps supply the world’s tables with bread– there are enough grain trucks on the road that if they were lined up they would reach to the moon. The United States also drives medical innovation for the entire planet. Only a cohesive, unified nation could accomplish this level of ingenuity.

With the rise of a fluid transportation system hunger has been reduced, the medical field is connected and supplied, and personal wealth has risen beyond what humanity has ever known before.

Looking back, we at Blue Eagle celebrate the success of the American Highway System– both as an instrument of national unity and as it has positively benefited the global food and medical supply chain.