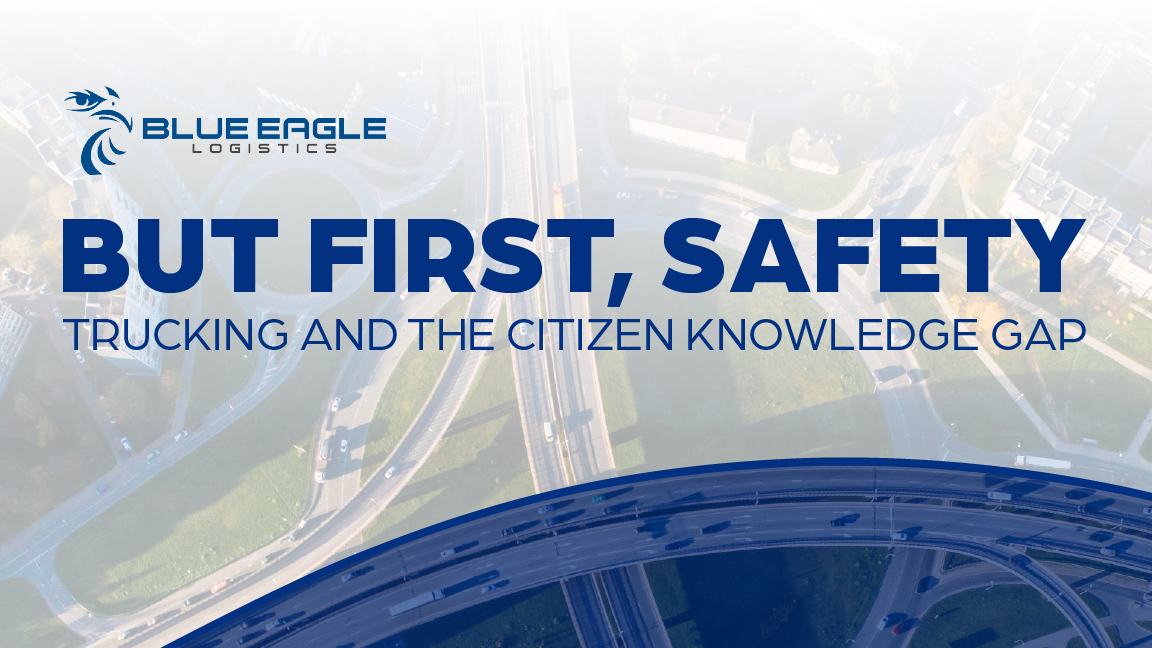 06 May But First Safety: Trucking and the Citizen Knowledge Gap

They say that courage doesn’t count until you have to use it.

Truck driver Morgan Kirkland knows all about that. During a routine haul, he was crossing a bridge when he saw a car headed in his lane that was set to hit him head on. Thinking quickly, Kirkland put his truck between the traffic behind him and the driver that was driving head on into them.

Kirkland could have easily pulled onto the shoulder to avoid the oncoming driver, but he knew that the cars behind him didn’t know about the danger.

To make things even more complicated, he had a flammable load. If Kirkland hadn’t thought quickly the cars behind him certainly could have been killed in the accident.

Instead, the wrong-way-driver was merely pinned beside Kirkland’s truck. Kirkland’s courage certainly may have saved the lives of the drivers behind him. And post-accident, he took the time to care for the intoxicated driver that had almost hit him head on.

Many drivers pride themselves on their willingness to give their lives for others at need… and they are sometimes faced with that choice: From stalled vehicles on the road to poor driving etiquette gone wrong, drivers have made the difficult choice to drive off a bridge or to hit a barricade rather than collide with citizens.

Some of the dangers that drivers face though are simply avoidable. That danger is deeply aggravated by the public’s lack of insight into the ways that trucks are designed to work.

Sometimes it’s a challenge to know what we don’t know. And it can seem simply impossible to know what other people aren’t aware of. The public’s knowledge-gap-issue is aggressively at play on the road: Few citizens understand basic safety fundamentals of cooperatively driving on the road with trucks.

That lack of understanding can be downright annoying for drivers: Citizen-knowledge-gaps can make a truck’s need to make wide right turns nearly impossible, and it’s easy for an individual to get their car swiped, when they are unaware that creeping up on a truck at a light can make it impossible for that driver to make a proper turn.

Blind spots are an even greater source of annoyance and danger: Plenty of drivers post warnings to “four-wheelers” stating, “if you can’t see me (in my mirror), then I can’t see you.” Because few members of the public understand the limitations of a truck’s mirrors, they seldom know how easy it is to camp out in a driver’s blind spot.

And drivers have to exercise terrific levels of patience when it comes to aggressive citizen-drivers: No one loves being brake checked, but an annoyed four-wheeler does not realize that they are taking their own life into their hands when they do so to a truck. Very, very few members of the public understand the lengths that a loaded truck needs to stop.

Right turns, blind spots, stopping distances, and more can easily become part of the public’s collective knowledge: Driver’s Ed classes can invite drivers to let students sit in a cab to see a truck’s blind spots for themselves. Or the DMV could easily require basic truck knowledge on its tests to get a license.

Maya Angelou said that, “Courage is the most important of all the virtues because without courage, you can’t practice any other virtue consistently.” We respect drivers for being willing to put their lives on the line for others, but let’s close the public’s knowledge gap and make the highways a safer place for everyone.